Adore Animals magazine published an article in 2007 (Issue 7) called Autism Assistance. This article was about the first organisation in Australia called Righteous Pups, based in Bendigo, Victoria, and their first litter of pups (then six weeks old) being trained to help kids with Autism Spectrum Disorders (ASD).

This was an enormous achievement for such a small organisation. Not only is the organisation now growing, but so is the public awareness for their services. In 2004, research conducted by the Australian Advisory Board on ASD (formerly the Autism Council of Australia) found that one in 500 Australians were diagnosed as having ASD, and one in 100 people were touched by the disorder through family and friends. Each week, approximately 17 children are diagnosed with ASD, and males are found to be more susceptible than females.

So how do the dogs help? Well, there’s an article in the Autism News that we recently discovered which gives a good indication of not only the health benefits of animals (what we’re always rabbiting on about!) but also how dogs directly help kids with Autism. This is a US report – but Autism knows no geographical boundaries, so it’s equally applicable the world over. 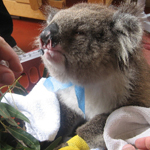